At the right bank of the river Gryžuva stands Pagryžuvis romantic style manor. It was built in 1858 by the famous architect of that time F. Rimgaila project. Pagryžuvis estate belonged to nobles Šemetos, and later - Pšeciševskiai family. After the First World War the manor was nationalized and handed over to the Jesuits. In the mansion was severely damaged during the war, caught on the front line. Until World War II, the palace had a Jesuit monastery. 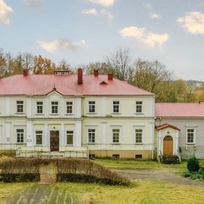